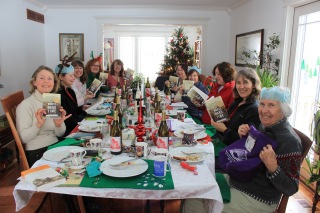 Rochester Reads seeks to encourage community discussion, family reading, literacy, understanding and cross community interaction by promoting the reading of one book and hosting discussions and events about the book.
This year Rochester Reads focuses on three books written about the Dust Bowl years of the 1930s.
The main selection is The Worst Hard Time by Timothy Egan, which tells the story of a time when “Dust clouds boiled up, ten thousand feet or more in the sky, and rolled like moving mountains”.
Allison Lassieur’s The Dust Bowl: An Interactive History Adventure has been selected as the junior title. This “You Choose” book explores many different story paths through the Dust Bowl years.
Leah’s Pony by Elizabeth Friedrich and Michael Garland, the picture book selection, tells the story of a farm family in the Great Plains trying to survive in a time of bank foreclosures and economic hardship.

The Friends of the Rochester Public Library are one of the proud 2011 Sponsors of this programme.

Rochester Reads : The Worst Hard Time:  the untold story of those who survived the great American dust bowl. by Timothy Egan

Egan is a journalist who worked for NYTimes for 18 years as PNW correspondent, reporter. He lives in Seattle WA.  Egan won the National Book award with this book. His latest book is The Big Burn: Teddy Roosevelt and the fire that saved America.
Dust storms terrorized America’s high plains in the darkest years of the depression, never seen before or since. Living members of six families/communities depict their struggles. Their stories were never fully told and will be lost without this in-depth interview. The descriptions include desperate attempts to carry on through blinding black blizzards, crop failures, and death. And while this is depressing, the light of the hope and human endurance shines.

What events led up to the great depression?

What caused the dust bowl – human conditions or weather?

How did the dust bowl/depression affect the midwestern farms?

How did the govt help victims of the dust bowl and the depression?  New Deal responses, what was effective, what not.

How does this relate to the environmental concerns of today/global warming/climate change?

Get into the SCOTTISH SPIRIT(s) as a preview to our Celtic Evening on November 30th, join us at the Rochester Symphony Orchestra and Chorale on November 6.  See their website for details.

Edinburgh was the first UNESCO city of literature. It is certainly a place where people get involved with words, holding one if not the largest book festivals in the world. But it is also home to many authors, writers, poets,past and present. The city now has a literature quarter along the High Street, between the castle and the palace! Besides one of my favorite museums -the writer’s museum, there are new venues such as the Scottish book trust, the Scottish storytelling centre and the Scottish poetry library. There are 26 lending libraries as well as the national library, a repository for published works (as well as priceless manuscripts and volumes of early authors). There is also a wonderful array of bookstores!

Scotland has a long literary history from its parliament passing the first compulsory education law in 1496, publishing industry beginning in 1508, the amazing Scottish enlightenment, to its current literary status in the world. Edinburgh isn’t quite built on books, but it has always been filled with writers, as well as a destination spot for literary travelers.
I share two quotes that you might recognise:
“Did not such strong connections draw me elsewhere, I believe Scotland would be the Country I should chuse to spend the Remainder of my days in.” Benjamin Franklin on visiting Edinburgh

“It seemed as if the rock and castle assumed a new aspect every time I looked at them; and Arthurs Seat was perfect witchcraft. I don’t wonder that anyone residing in Edinburgh should write poetically.” Washington Irving.

They certainly write poetically about their whisky too. I will have much to talk about on our Celtic Evening celebration!

Greetings MPR Fans – I hope you will consider joining us at the Rochester Art Center on October 5th from 5:30 -7:00 pm.

The regional leadership of Minnesota Public Radio will also be on hand for food, drink and a discussion about the future of public broadcasting in Minnesota and the United States.

The event is free, but we request your registration at http://www.mpr.org/rochester.